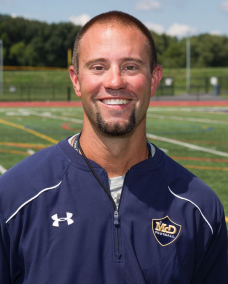 Tommy has been coaching track & field for 20 seasons.  Over that span, Tommy is the all-time winningest track coach in school history with over 130 wins in 15 years at Bishop McDevitt.

Specializing in sprint and relays as an assistant or head coach, Tommy has coached over 45 individual District III 2A / 3A champions and eigth PIAA 2A / 3A individual state champions.

Tommy was also the sprint coach on the 2004 PIAA Boys 3A Championship team at Central Dauphin High School.

Under Mealy’s leadership, team participation numbers & morale have been very strong under the team slogan “Catch The Spirit.”

In addition to track & field, Tommy also serves as Bishop McDevitt's athletic director and he is an assistant football coach.

Tommy and his wife Jessica, have daughters Kayla (McD Class of 2016)  and Jenna and a son named Trey.

Powered by Zumu Software
Websites at the speed of thought.
www.zumu.com